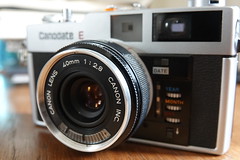 The car of the future today

Love in the Time Before Zombies

Is time travel a cop-out?

Dog in the grass

Dog in a backpack

Best use of a milkcrate

Before it all went wrong...