It was the mid-90s and you could still run full tilt through an airport without fuss and arrive at a gate just before the door closed. I’d already missed my connection for any one of the usual reasons, and this was the last flight leaving Pittsburgh for Philadelphia. And somehow there was one ticket left, a middle seat to carry my sleepy body to beautiful snowbound Philadelphia, barely an hour away. I was elated.

Arriving at my designated row, I nodded to the seat, and the woman occupying it, rather than standing to let me pass, simply slid over to the middle seat, the most noble gesture one traveler can make for another. “No, that’s very kind. Please, the aisle seat is yours,” I said, indicating that she should not make this sacrifice for me, a commoner.

“Sir,” the flight attendant said. “Please have a seat so we can take off.” I did, stuffing my laptop bag under the seat.

“Thank you,” I said. “That’s really the nicest thing anyone’s done for me. I can’t believe I even got a seat on this flight. I missed my connection. Bad weather in Chicago. This was the last flight.” I was babbling, my heart still pounding from my run through Pittsburgh International, my face slick with sweat.

“You’re welcome. You have my traveling companion’s seat. He couldn’t make it.”

“He couldn’t find his ID and they wouldn’t let him through security.”

“His bad luck certainly worked out for me!” I was still wound up and I was talking too loud.

“Well, here’s the really funny part. When he wasn’t looking, I took his driver’s license out of his wallet. I have it right here in my purse.”

“I’ve been trying to get rid of him, but we made plans for this trip ages ago. Despite my protests, he insisted on coming. Know what else?”

I threw my hands up, then said, “You took his car keys too.”

“That’s what I would have done.”

She laughed. “He was abusive. With me.”

“Oh.” I looked down, as if to atone for the guilt of all abusive men. “Physically…psychologically…?”

“It doesn’t matter. Just abuse. So, you have someone picking you up? In Philly?”

“I don’t think she likes me all that much. She’s cold with me. It’s not nearly as good a story as yours. Not that abuse is good… I mean…”

She laughed again. “I understand. You don’t have to say anything else about her.”

She folded her arms across her chest and yawned. “I’m going to try to sleep the rest of the way, if that’s OK.”

Of course it’s OK. We were strangers. She didn’t owe me a conversation. I picked up the inflight magazine and in a few minutes my eyes glazed over and I too fell asleep.

When the plane started to descend I woke up. She was still asleep turned toward me, her head on my shoulder, a hand on my chest, all perfectly naturally. I tried not to move. In awhile, the cabin lights brightened and something dinged and she stirred,  realizing she was leaning on me.

“Oh, I think I drooled on you.” She leaned back away from me. “Thanks for letting me drool on your shirt.”

“You’re welcome. Thanks for the aisle seat.”

“What are you going to do when you get back to Pittsburgh? He’ll be angry.”

“Likely I’ll have him killed.”

“Maybe you’d kill him for me?”

“Maybe you’d give me your phone number?”

“Certainly not if you’re not going to bump off my ex.”

We both laughed. The plane landed. I handed her bag down to her and said goodbye. After getting off the jetway, I turned around and saw a couple hugging her. Parents?

I stopped at a phone booth to call the girlfriend. Let her know I’d arrived and that I’d be going back to my apartment. It was late. See her tomorrow maybe. I rummaged my pockets looking for change. Nothing. Nothing but the “Inspected by #4” slip of paper in my shirt pocket. I always leave them in just in case there’s a spot shirt inspection. All I have to do is produce the little slip with its block lettering, and voila, no shirt inspection. I took it out to have a reassuring peek, and there on the other side, neatly written in blue, a phone number.

I rolled my carry-on to the bus that takes me to longterm parking. She climbed into the back of a Saab 4- door, glanced up and saw me in the bus window. She smiled, raised a hand, index finger pointed, thumb up. Bang bang. 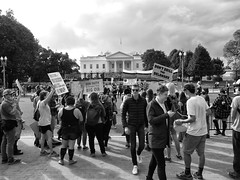