Susannah Fontaine-Williams landed at JFK, ambled quickly through customs, and isn’t the new system great, and saw the man holding her sign, S WILLIAMS. Her driver, Rodrigo, led her to the black car waiting at the curb, held the door open and in she climbed, escaping the sweaty New York City morning.

Walt sat in the back seat behind the driver; though she saw him she didn’t acknowledge him. Let him speak first.

“Home?” Rodrigo said. She nodded to his sunglassed reflection in the rear view mirror. The glass partition began closing and she said, “Let’s drop off your other passenger on Canal first.” He nodded and the partition closed.

On with the story:
She thought for a minute how badly she’d wanted to see Thomas Jefferson’s copy of the Declaration of Independence at the New York Public Library. She’d landed on July third, the last day it would be on display, but this post didn’t get written for nearly a week and by now it had returned to from whence it came. “Damn,” she whispered. “My fault,” I whispered back, that voice in her head we all have, only hers is mine.

Walt fidgeted beside her, uncertain where to start. He didn’t like being a passenger in cars. He never knew what to do with his ungainly long arms. The limo had handles above the doors and he grabbed the one on his left allowing his left arm to hang. But the right arm, what to do with the right arm? On the ride to the airport, it spread wing-like over the top of the back seat. Very comfortable. Now, with Susannah next to him an extended arm would drape over her shoulders – and that would require explaining – so he crossed it back in front of him and now held the handle in a two-fisted grip.

SFW reversed her position on who would go first and said, “Walt, it’s very kind of you to come meet me at the airport. Not many people would do that, especially for just a customer.”

“How is the bag working out?” Walt said.

“It has exceeded my every expectation,” Susannah said. “You have no idea how much I crammed in here for my trip.” Despite the ever-present construction,  they soon were entering Manhattan via the Queens-Midtown Tunnel.

“My memory isn’t so good – I wrote it down.” He pulled out a slip of paper.  “Six dresses, two pair of shorts, a few tank tops, a dozen panties and bras, six pair flats, four pair of heels, some gifts which I see you’ve brought back with you. Six skirts, six tops, two dozen…”

“How do you know all that?”

“Hard to explain. Maybe it’s better I show you.”

She turned to look out the window and watched the buildings of Midtown Manhattan roll by. This should be taking much longer. Where’s all the traffic? And she wasn’t sure if it was her voice or mine asking those questions. If he knows the contents of my bag, what else does he know?

“May I see the bag?” he said. She tilted her head slightly and it reminded me of what a golden retriever does sometimes. It’s a quizzical thing. “I just want to check it out. I’ll give it back.” She handed it to him.

He held it up by the handle at eye level, slowly turned it, rubbing its surface and closely eyeing it. “Amazing!”

“No damage, no signs of wear. It’s held up remarkably well. May I open it?” he said while opening it. He peered into its black interior, shook it, turned it upside down – nothing came out – and put a hand inside and rooted around.

“Anything you want to tell me…about the bag’s performance?” he said. “Anything odd?”

Oh, she thought, like a shoplifted Vera Wang disappearing? Like a hat and a knife conveniently appearing just when I needed them?

“This bag saved my life.”

The car pulled up to Walt’s place in Chinatown. Walt handed back the bag to her. Rodrigo came around and opened Susannah Fontaine-Williams’ door, and helped her out. She signed the receipt – her show would be billed, or the station would – and handed him a fifty. “Shall I wait for you?” Rodrigo asked.

She looked to Walt for guidance. It must have been a combination of the sweaty air, a growing psychic disorientation, and standing too quickly that made her dizzy and she leaned against the car until the feeling passed. 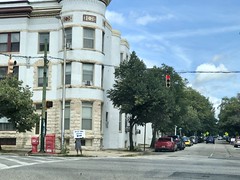