We’ve arrived at weddings as guests are filing through the reception line.  SFW will cause a scene if the theater won’t seat us because the curtain has already risen. At movies, we not only miss the previews and ads, but sometimes arrive so late we have to sit apart.

A little bit about movies with SFW. She talks, she comments, she interjects, she sighs, cries, gropes, snorts and laughs – an immersive experience. She won’t let you get anything for her at the concession counter, but will eat everything you get for yourself. She smuggles Smarties and kettle corn and I can already see a great use for this new bag of hers. Sitting apart just won’t do so I lie to her about start times, the current time, the traffic, the weather…anything to get her there.

It’s late afternoon when we tumble back out onto Canal Street, with the bag that bends space-time swinging care-free from her shoulder. She’s poured everything into it from her precious letterless Louis V bag.

I don’t, which leaves me the indignity of carrying it. We walk uptown through Soho  stopping in galleries and shops before she flags down a cab with a barely perceptible wave. To the observer it appears taxis pull up and she gets in without the slightest indication that she signals for one.

“Let’s see those earrings you’ve bought me,” she says.

She opens her bag, turns it over and shakes it. When SFW needs something from her bag, she doesn’t rummage, she dumps everything out. Nothing comes out.

“Oh, that’s odd.” She rights the bag, reaches in, feels around for a moment, and pulls out the neatly wrapped box with her earrings.

“And don’t forget, you can’t see inside it.”

I’d forgotten that. “And what was he going on with about electronics?”

“Don’t worry, my phone’s right here in the outside pocket.,” she says, then taps the driver on the shoulder. “Pull over right here,”

“This is where you get out,” she says to me. “I found a street spot. Aren’t you proud?”

She reaches into her bag, feels around for a second and pulls out the key fob. The electronic key fob.

I push unlock and lights flash on every car in both directions on the block. The door to my car does not open. I push unlock again, and again every other car flashes, including the cab. I try the door of the car just behind mine and the door opens. I push lock and again lights flash and I hear the lock click on the car I just tried.

I press the remote start button on the fob twice and I hear a dozen car engines turn over, but not mine. 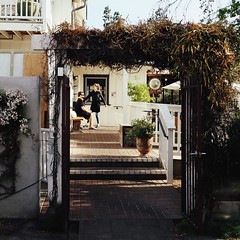